Home
Do You Know?
The Airplane Crash that Spelled Success!
Prev Article Next Article

The morning of December 17, 1903 was dark and windy on the Outer Banks of North Carolina. Despite the windy morning, Orville Wright determinedly climbed into a fragile little airplane he and his brother Wilbur had painstakingly constructed to attempt his first flight. Orville’s attempt was actually the brother’s second attempt at powered flight.

Only three days before, the brothers had tossed a coin to see who would climb behind the controls first. Wilbur Wright won the toss. As Wilbur attempted to take off — he crashed. However, the flyer was airborne for a few seconds. Just long enough for Wilbur to note the responsiveness of the controls and the power of the engine. Wilbur later reported, “There is now no question of final success.” 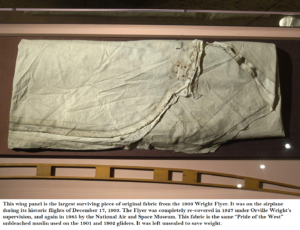 After days spent making repairs, it was now Orville’s turn to get behind the controls of the fragile little airplane.  John T. Daniels, Kitty Hawk crewman, described the brother’s emotions just before the flight — “After a while they shook hands, and we couldn’t help notice how they held on to each other’s hand, sort o’like they hated to let go; like two folks parting who weren’t sure they’d ever see each other again.”

Orville mounted the craft, sped down the rail runway they had built, and then flew the small 605-pound winged craft for all of 12 seconds and maybe 120 feet. After Orville’s giant success, Wilbur took his turn and set the record for the day, flying for a little more than half a mile in 59 seconds.  Despite the two flights being absurdly brief, they made history. Amazingly, that first flight was captured on film.

At the time, photography was an art unto itself. Yet, Orville was master of more than powered flight and you see it evidenced here by the famous first flight photo with both brothers pictured.

Orville preset the camera and instructed assistant John T. Daniels on squeezing the rubber bulb to fire the shutter just in time to catch the first powered, controlled and sustained flight. Orville Wright is at the controls, lying prone on the lower wing. Wilbur Wright, running alongside, has just released his hold on the right wing. 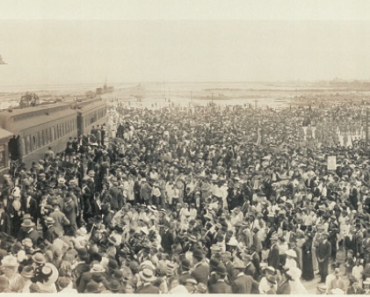