Home
Do You Know?
Tell me it ain’t so!
Prev Article Next Article

Many of you reading this are going to be very disappointed to learn this little kept secret about the iconic movie ‘Gone with the Wind.’ If you’re visiting Atlanta hoping to see Scarlett O’hara’s opulent deep south estate, ‘Tara’ – you’re gonna be disappointed — because not a single scene was shot in Georgia. Not one single scene!

The reality is that virtually all of the movie was filmed on David O Selznick’s studio lot in Culver City, California. The studio was originally built in 1916 by Hollywood innovator, Tom Ince. It passed through many hands before being acquired by Selznick. In 1957, it became the Desilu-Culver studios owned by Desi Arnaz and Lucille Ball.

Some of the more celebrated films shot there include The King of Kings, King Kong, E.T., and Gone with the Wind, and more recently, The Matrix, Armageddon, and I Am Legend. In addition, several popular television shows were shot there including The Andy Griffith Show, Lassie, Batman, Hogan’s Heroes, The Nanny and, more recently, Scrubs, Arrested Development and Cougar Town.

Studio headquarters was the mansion you see before the titles of many classic David O Selznick productions. However, it was not the fabled ‘Tara’ from ‘Gone with the Wind.’  The studio’s Culver City, Washington Boulevard entrance does appear in the picture as the grand approach to the “big new house in Atlanta” into which Rhett and Scarlett move after marrying. In this shot, the building is passed off as a southern mansion with the help of a matte painting, a painting on glass placed in front of the camera. But, the formal lawns and the path to the mansion with its central hedge remain nearly unchanged in the movie.

When you watch the scene of the burning of Atlanta, look closely. What you saw go up in flames was the studio’s backlot which was a massive space-clearing conflagration. You can clearly see the giant gates of King Kong’s ‘Skull Island’ going up in flames in the background.

Not all of the movie was shot on the studio’s backlots. There were locations around Pasadena and Los Angeles that were used. The big bar-b-que at ‘Twelve Oaks’ was staged on the Busch Gardens estate (Yes, the famous Busch brewing family) in Pasadena. While the gardens eventually succumbed to developers, remnants of the gardens can still be seen around the homes that were built on the garden lands. Look closely at the homes on Arroyo Boulevard between Bellefontaine Street and Madeline Drive.

The scene where Scarlett vows never to go hungry again, is an early morning sunrise at an area known as the Lasky Mesa which has been used as a backdrop for many film and television productions. The area is near Calabasas, California northwest of Los Angeles. The attack in Shantytown was filmed at Big Bear Lake in San Bernardino, California east of Los Angeles. The famous cotton fields of Tara, and O’Hara’s first horse ride, are depicted around Chico, about 80 miles north of Sacramento. Look around the areas Bidwell Park and Pentz Road. 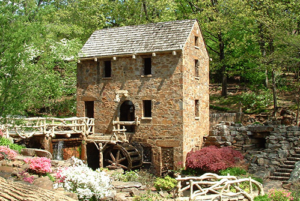 Only one scene was shot outside of California. And no, it wasn’t shot in Georgia. It was filmed in Arkansas, of all places. It is briefly seen in the opening of the film, the charming little watermill. The watermill itself has a unique history and is known as North Little Rock Mill or Pugh’s Old Mill. It is located in North Little Rock, Arkansas — across the Arkansas River and the capital city of Little Rock, Arkansas. Despite its quaint and picturesque appearance, the mill was actually built in the Thirties, about the time of Gone with the Wind’s filming, and was deliberately designed to look like a natural part of the landscape.

And, there you have it. Not one single scene was shot in Georgia. The one consolation Georgian’s can claim, the inspiration for the film is all Georgia.