Home
Do You Know?
Do you know what’s written on the back of Hank William Sr’s headstone?
Prev Article Next Article

Follow Sam
Samuel M. McCall
Senior Editor at Wacky Explorer
Sam attended Auburn University and has an MBA in Accounting. He currently lives near Tampa, Florida with his wife, Ashley. They are fans of the Tampa Bay Rays and the Tampa Bay Lightning. During football season you might hear Sam yelling "War Eagle" 'round the house on Saturdays which generally startles the Rotti's. Sam's favorite read, "To Kill A Mockingbird." Favorite movie, "Unforgiven." 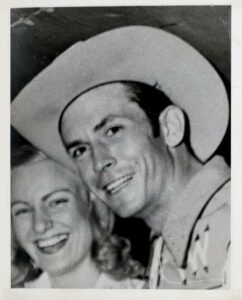 Photo of Hank and Audrey provided by the Hank Williams Museum in Montgomery, Alabama.

On a high hill overlooking north Montgomery, Alabama, lie the remains of Hiram King Williams, a.k.a. Hank Williams Sr., and Audrey Sheppard Williams. It’s a beautiful sight to visit and sit for a few minutes. But, a little confusing if you know the history surrounding Audrey and Hank.

It is often reported that Hank’s personal life was in shambles just before his death on January 1, 1953. In fact, he and Audrey had divorced in 1952 just months before his death at the age of 29.

Hank married his second wife, Billie Jean Jones Eshliman, on October 18, 1952 soon after his divorce from Audrey. In other words, Hank was married to someone else when he died. Yet, in a cemetery overlooking Montgomery, side by side for eternity, lie Hank and Audrey.

In a legal battle that followed Hank’s death, Billie Jean’s marriage to Hank was declared invalid because her divorce from her first husband did not become valid until 11 days after she married Hank. Eventually, Audrey was declared Hank’s legal widow.

This is all the more ironic when you consider that Audrey’s marriage to Hank might not have been legal either. They were married in December 1944 at a gas station by a Justice of the Peace only 10 days after her first divorce. The legal requirement at that time was for Audrey to wait at least 60 days before marrying again.

In between these two marriages, Hank Williams Sr. managed to have a short relationship with a woman named Bobbie Jett with whom he had a daughter, Antha Belle Jett, who was born January 6, 1953 — five days after Hank died.

Nevertheless, when you visit the resting place of Hank Williams Sr., the focus is on the lives of Hank and Audrey. And, maybe that’s as it should be. Many people say that had it not been for Audrey, Hank might not have become the country music legend we know today.

In a 2008 article by  Bill Friskics-Warren, Hank’s daughter Lycrecia was quoted as saying, “Had it not been for Mother, I just don’t think Daddy would have gotten to Nashville, unless somebody else could of got a hold of him and pushed,” said Lycrecia. “Daddy, he liked to entertain. He was a genius, but Mother was the mastermind behind getting him where he needed to be.”

So, what’s written on the back of Hank William Sr’s tombstone? The words etched in stone:

Thank you for all the love you gave me

There could be one no stronger

Thank you for the many beautiful songs

They will live long and longer

Thank you for being a wonderful father to Lycrecia

She loved you more than you knew

Thank you for our precious son

And thank God he looks so much like you

And now I say:

There are no words in the Dictionary

That can express my love for you

Someday beyond the blue